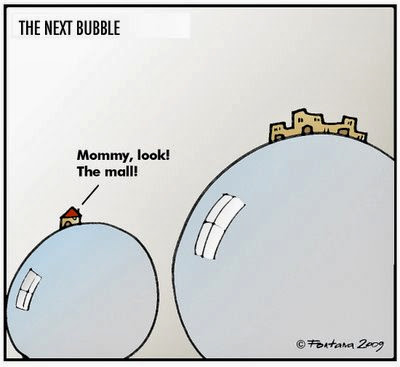 While the Obama administration and the politically powerful oligarchs of finance focus on so-called public/private partnerships as a solution to the financial toxicity created by securitized subprime mortgages, another sizeable component of real estate securitization on bank balance sheets is on the verge of being the next domino to fall. While residential real estate’s impact on the global financial and economic crisis still retains the spotlight, indications are growing that a global commercial real estate implosion is on the verge of becoming the next asset bubble to pop, with devastating consequences. Perhaps it is only because so many fires are already burning amid the rotting timbers of our flawed financial architecture that the impending disaster about to afflict commercial real estate has yet to compel urgent attention. Some, however, are astute enough to see the train wreck that is coming down the track at breakneck speed. Take, for example, billionaire financier and investor George Soros.

Speaking at a conference held in Washington, Soros said, “Commercial real estate has not yet fallen in value. It is inevitable, it is written, everybody knows it, there are already some transactions which reflect and anticipate it, so we know, they will drop at least 30 percent.”

What are the transactions that George Soros is referring to? Some major commercial real estate markets are already pointing towards a catastrophic collapse. The brokerage firm C.B. Richard Ellis Inc. has issued a report on the prime Manhattan commercial real estate market that presents a truly apocalyptic image. The past year saw the value of Manhattan office building transactions decline by a staggering 69%. A high proportion of such sales were of a distressed character, the bulk involving buildings that had been owned and managed by Harry Macklowe. The real estate entrepreneur was forced to deleverage due to his inability to secure financing and meet loan obligations to his creditors, in particular Deutsche Bank. This process of forced deleveraging has had its inevitable impact on the Manhattan commercial property marketplace. Buildings that Macklowe purchased on credit for $1,100 a square foot are now obtaining as low as $778 a square foot, in the diminishing number of cases where buyers can actually be found who still have access to credit.

The contraction of the commercial real estate market in New York is only a harbinger of what is beginning to occur with increasing rapidity in large cities and medium sized towns, not only across the United States but also throughout the world. Two forces are at work in this disaster in the making; frozen credit flows and rising unemployment. Both forces feed on each other in a perpetual negative feedback loop. Restricted access to credit means property owners cannot meet their loan payments or refinance, forcing deleveraging, which in turn further distresses commercial property prices. The increasing levels of unemployment arising from the Global Economic Crisis has unleashed a wave of demand destruction, the likes of which have not been seen since the Great Depression of the 1930s. In major cities and shopping complexes across the globe, retail outlets are bereft of customers, in the process liquidating essential cash flow for these enterprises. This means even where credit might be available, such as through government funded injections of capital into the banking system, enterprises lack the capacity to service loans that otherwise might be accessible. The result is a self-perpetuating meltdown in which commercial real estate increasingly becomes vacant, with few potential buyers or tenants available, further distressing their economic value.

Just as with securitized subprime mortgages, many commercial banks, investment houses as well as the vast shadow banking system invested heavily in paper backed by commercial real estate. For those retaining hope that commercial property mortgages were consummated with more due diligence than was the case with residential borrowing, their optimism will soon be proven to have been unwarranted. Until about 2007, a commercial real estate boom existed in parallel with the residential housing bubble that was being fed in large part by the Federal Reserve and its low interest rate policy. Very often substantial properties were purchased, at the peak of the market, with 90% of the purchase price financed through credit. As these loans become increasingly non-performing, in synchronicity with the diminution in value of the collateral that backed up those loans, another transformation of bank balance sheets into toxic acid will be unleashed, with a vengeance.

How significant is the exposure to the coming implosion in the commercial real estate market? Estimates range in the trillions of dollars. Commercial properties encompass a vast array of buildings in developed and developing economies, from small, medium and large sized office buildings to shopping malls of all dimensions. Strip malls and mega-shopping complexes are losing tenants, with no one lining up to replace them as the Global Economic Crisis curtails demand by consumers. With fewer tenants and constricted income, property owners unable to service their outstanding loans are deleveraging, as mentioned above. Keep in mind that this is not just a New York City phenomenon; London and Budapest, Los Angeles and Berlin, Seattle and Tokyo are already seeing this torrent of economic destruction at work. As the implosion in commercial real estate accelerates, the already fragile global banking and credit system will be hammered yet again. In a worst case scenario, the blow about to be delivered by this next bursting asset bubble may prove to be mortal for the global economy.

Sheldon Filger: Commercial Real Estate May Be the Next Asset Bubble to Burst